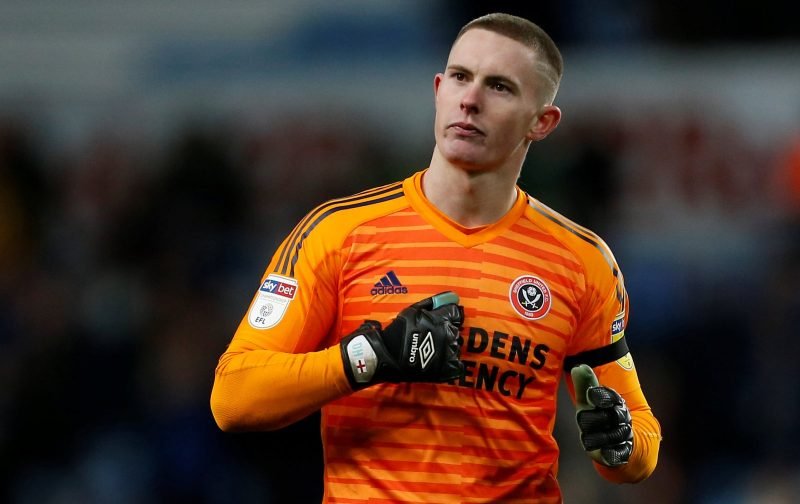 Something that has cropped up on more than one occasion this summer has been the subject of who might be between the sticks for Manchester United this coming season.

With the future of David de Gea, far from secured, Click Here, there has been much speculation
Click Here, as to who the club should buy to fill a potential void.

One article we ran Click Here, suggested that Sergio Romero could be just the man to step up and claim the goalkeepers’ jersey.

But there is another option.

After a successful season, on loan with Sheffield United, Dean Henderson is back at the club.

The 22-year-old, who played a major contribution in Sheffield United getting promoted to the Premier League, feels that he is ready to challenge for the green jersey at Old Trafford with the England U21 international quoted by the

Daily Mail, as having remarked:

“It’s a tough one to say where. But do I think I should be playing at Manchester United now? Yes, I do.

“I think I am good enough and I would help the team a lot, in a positive way.

“If not there I’m sure I could go back to Sheffield United, play a season and then I’ll prove to Manchester United what they are missing.”

He’s rubbish you should sell him right now … LIKE NOW

Reading the comments on here it’s easy to see just how toxic @ManUtd are ATM, @deanhenderson is a class keeper who is truly one of your own and you couldn’t care less about him playing for you. The boy deserves better, hope to see him at the lane again next season ⚔️????⚪⚔️

But Manchester United supporters are also keen to see him given a chance at Old Trafford, even more so with, as we mentioned earlier, the future of David de Gea being uncertain, as the following posts illustrate perfectly:

Keep him and get him in first team

The kid is ready to battle Romero this season for No1 spot should DeGea refuse to sign a new deal. I love DeGea but even if he signs a new deal will he push for a move in 2 years? By then Henderson will have asked to move to become England No.1 keeper by playing elsewhere.

But it’s not just Manchester United and Sheffield United supporters who rate Henderson, with the keeper having admirers elsewhere:

Stupidly it still appears not good enough to put him in the Manchester United first team instead of De Gea. As a Rotherham fan seeing him play for Shrewsbury I’ve not seen a better young goalkeeper

So, what does the future hold for the popular young keeper?

Personally, I’d love to see him stay at Old Trafford and given a chance, but I fear the hierarchy are set to ship him off for another season to a lucky club who will benefit from having a top-notch keeper on their books.

But what do you believe Manchester United should do with Dean Henderson?