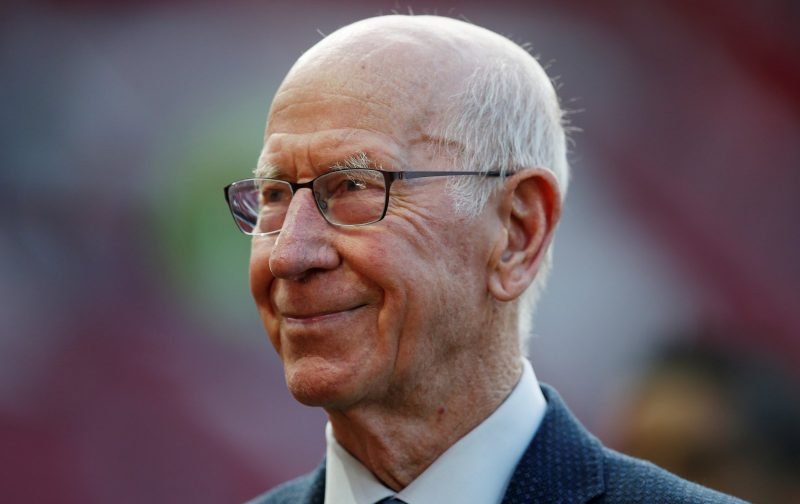 The admission price to see this Battle of Britain encounter ranged from 45p to 90p and the match programme cost 15p. The 1967 European Cup winners, Celtic, and United, the team which took over The Hoops’ mantle as “Best Team in Europe,” the following year drew 0-0 before a record crowd for a Testimonial, 60,538. This record stood for 29 years until Ryan Giggs’ Testimonial attracted a crowd of 67,500 to see United lose 4-3 to Celtic on 1 August 2001.

It was a fitting tribute to the Busby Babe who had served Manchester United loyally since making his debut versus Charlton Athletic at Old Trafford on 6 October 1956, just five days short of celebrating his 19th birthday. United won the First Division game 4-2 with the teenage Charlton scoring twice. The game was played on a Monday evening and earlier that day Piccadilly was a sea of green and white as some 10,000 Celtic fans came down from Scotland to cheer on the famous Lisbon Lions. The bars and clubs were jam-packed with United and Celtic fans hanging out of every door. Different Irish accents could be heard among the travelling Celtic army. However, the game was nearly called off at the last minute. When some United fans began chanting for Glasgow Rangers before the match, the Celtic fans responded and surged towards the Stretford End. Had there not been a huge fence separating the warring factions, things would have turned out really nasty. Both sets of fans were pushing the fence from opposite sides, but thankfully it stood firm. Fortunately, Jock Stein, the Celtic manager, saw what was happening and he urged his supporters back to their places, and further trouble was averted.

During the game, every touch by Charlton, who was wearing the famous United No.9 jersey, was cheered and even the Celtic fans urged him to score. He may have been 35 years old at the time, but he was most certainly United’s best player on the night. Wyn Davies made his United debut in the game following his £60,000 transfer from Manchester City on 14 September 1972. A future United star, Lou Macari, was wearing the famous green and white hooped shirt whilst the best player on the pitch was the majestic Kenny Dalglish. At the banquet held after the game, Prime Minister Harold Wilson told Celtic’s John “Dixie” Deans that he recommended him to Huddersfield Town when Dixie was a Motherwell player (1965-71).

A crowd of 60,538, a British record for a benefit match, packed Old Trafford last night to see Manchester United and Celtic fight out an absorbing goalless draw in Bobby Charlton’s testimonial match.

From the onset it was apparent that this was to be no goal-happy fiesta. That would have been unworthy of the occasion, the dignity of the two great clubs, and the man they had come to honour. If the crowd, which included Tommy Docherty, Sir Alf Ramsey and stars from the past and present were not treated to a Charlton special they were able to enjoy a fine game of pure football.

After only three minutes Celtic were awarded a free kick a yard outside the penalty area. Murdoch’s left foot drive cannoned off the defensive wall and from the rebound McNeill volleyed in a blistering shot which Stepney punched away at the near post.

Four minutes later Dalglish bewildered United’s defence, sending Deans away down the right. The centre forward’s immediate pass into the middle found Johnstone but the winger’s shot hit the outside of the netting.

Having weathered the early onslaught, Manchester United countered through Kidd, who first forced Williams to a good save then sliced a perfect pass through a square-standing Celtic defence to Law, who revelling in the big occasion, slid his shot wide as he fell. Charlton caused a hum of embarrassment in the crowd with one appallingly wild crossfield pass but redeemed himself when he accepted a ball from Law and advanced threateningly on the Celtic goal. His final shot lacked power however, as defenders converged on him.

This was a refreshing, tension-free performance from United, quite divorced from their recent games. Another flowing move sent Charlton away and this time he was able to set himself before unleashing an effort that went over the crossbar.

The goal from Charlton which most of the crowd was willing for him, was not to come and it was Celtic who now were beginning to control the game with the mighty Murdoch dominating the middle of the field.

Hood replaced Johnstone at the start of the second half and later Wilson came on for Deans. Kidd limped off injured and Law also withdrew, McIlroy and Sartori taking their places.

With 10 minutes remaining Celtic began to overrun a tiring United defence and twice Macari had opportunities to win the match. A delightful exchange with Dalglish left United’s defence in tatters, but Macari somehow scooped his shot wide. Then he failed to turn on to a loose ball as it rolled temptingly across the face of an open goal.

All that remained was for Bobby Charlton to do his lap of honour, surrounded by hundreds of youthful enthusiasts to whom he has given so much pleasure over the years.

By the way do you remember Panini stickers? They did my head in and murdered my pocket! I don’t think I ever managed to get a full team. I had at least two full Bobby Charlton teams because nearly every packet I bought had a Bobby Charlton sticker in it. I even found myself peering into the slightly ripped packet and upon spotting a white England shirt and the name “Charlton,” I secretly hoped it was his older brother, Jack, who played for Leeds United. Blasphemy, I know but I was only 7!

Or what about those Esso coin collections? I can remember getting my father, may God Rest Him, to take me here, there and everywhere in the car just to waste his petrol which I knew would mean a visit to the filling station where I would get one coin for every £5 of fuel he purchased. My Dad was my world and would do anything for me and he knew only too well what I was up to. And no matter how many times my Dad took us to Newcastle, County Down which was about a 60-mile round trip from our home in Ballybeen, I never did manage to complete my Esso collection. Those old Vauxhall Viva’s must have been very economical with their fuel consumption!

Season 1972-73 was also the first and only time United participated in the Anglo Italian Cup: 1-1 at home with Fiorentina, 0-0 away with SS Lazio, 3-1 at home to AS Bari and a 4-1 away win over Verona. The latter game played on 2 May 1973, marked Bobby Charlton’s last ever appearance for the club and he signed off just as he did when he made his debut on 6 October 1956, by scoring twice. Bobby’s United record was going to be hard to surpass:

Bobby joined Preston North End in the summer of 1973 where he spent two years as their player-manager and was still banging the goals in despite being 37-years old. In 1976, he joined Waterford United in the League of Ireland (3 games, 1 goal), played one game for Newcastle KB United in Australia in 1978, 3 games for Perth Azzurri, Australia (1 goal) in 1980 and that same year he played for his third Australian side, Blacktown City scoring a goal in his one and only appearance for them.

Bobby survived the 1958 Munich Air Disaster which cruelly claimed the young lives of eight of his fellow Busby Babes, including David Pegg and Tommy Taylor, with whom Bobby and Dennis Viollet swapped seats with prior to the third and final fatal take-off attempt. He suffered cuts to his head and severe shock and was in hospital for a week. Bobby was capped 106 times by England (1958-70), winning the 1966 Fifa World Cup alongside his brother and United teammate Nobby Stiles (United’s John Connelly was also in the England squad), and scored a record 48 times for his country which was subsequently passed by another United legend, Wayne Rooney, who netted 53 times in his 120 internationals (2003-18).

In January 2011, Bobby was voted the fourth greatest Manchester United player of all time by the readers of Inside United and ManUtd.com, behind Ryan Giggs (who topped the poll), Eric Cantona and The Belfast Boy, George Best and on 15 February 2016, Manchester United announced the South Stand of Old Trafford would be renamed in honour of Sir Bobby Charlton. The unveiling took place at the home game against Everton on 3 April 2016. In October 2017, he had a pitch named in his honour at St George’s Park, the English Football Association’s national football centre.

Bobby Charlton made one appearance for Glasgow Celtic during his career. Bobby was in charge of Preston North End at the time and was preparing for a comeback. On 13 May 1974, Celtic were in England to play Liverpool at Anfield for Ron Yeats’ Testimonial Match. So Charlton asked Jock Stein if he could play as a guest in the game in a bid to retain his fitness and Big Jock agreed. Celtic won the game 4-1 and Charlton, aged 36, was among the goal scorers.