Shoot! Plus A Tale Of Dedication And A United Dream Fulfilled 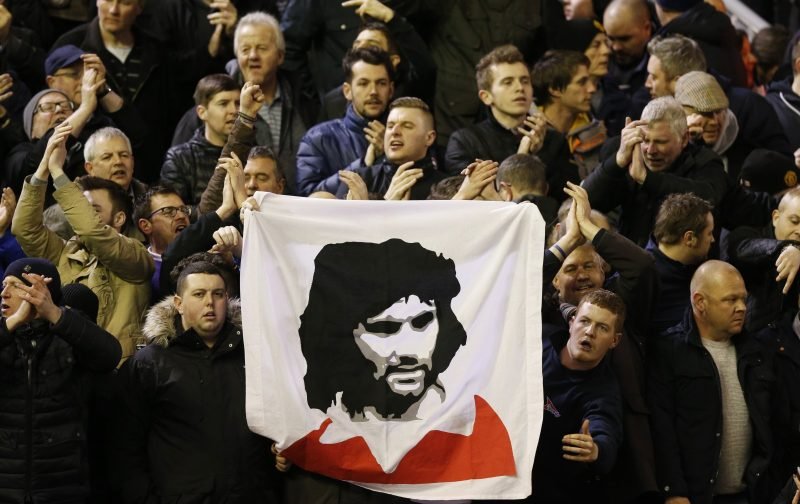 I don’t know about you, and I suppose it will depend on your age, but I could not wait to get my hands on a copy of “Shoot!” magazine every week when I was a young boy growing up on the streets of Belfast during the 1970s. And to celebrate the 50th anniversary of its first release on 16 August 1969, a special annual edition has been released.

I spent many hours playing football on the streets of Harper Street and Edgar Street. There were no gardens or pitches in the Short Strand: we used jumpers or streetlight poles for goalposts and drew a line of chalk on a gable or factory wall to identify the crossbar. But this boy from Belfast was never going to be able to emulate the one and only Belfast Boy, George Best, my boyhood idol. So instead of playing for Manchester United I poured everything I had into supporting my team.

When I attended Saint Matthew’s Primary School, the idea of sports shops selling replica football shirts to fans was still some 15 years away. But I wanted a kit just like the one George wore for United and so my Mum, Rosaleen, improvised by buying me a red football jersey with a white winged collar. I was a member of Manchester United’s membership scheme at the time and sent a postal order for £0.99 to Old Trafford to cover the costs of a Manchester United crest patch plus post and packing.

When it arrived about ten days later my Mum sewed it on to my jersey for me and made two number ones from a pillowcase to sew on to the back of it. I may not have had an official GB No.11 shirt but for me it was the next best thing. Mum then kindly bought me a pair of plain white shorts but to make my GB kit complete I needed a pair of black socks with the red and white top. For weeks on end Mum and Dad searched everywhere for a pair including a visit to SS Moore’s Sports Shop in Belfast city centre to the various jumble sales we used to attend.

The jumble sales were a great way for me to add to my various United bits and pieces as I could buy badges, patches, pennants and old copies of Shoot football magazine that for some reason I could not fathom why people no longer wanted. My bedroom wall above my top bunk bed was covered in Bestie photographs from football magazines of the day and several football pennants I got on family holidays to Bray in County Wicklow, Republic of Ireland. Still at Primary School I can remember going home from school in late April 1973 on a beautiful sunny day. George was still at United at the time but would be gone in less than a year, retiring on 1 January 1974 aged just 27.

My other love at the time was music and I was a big fan of Sweet, Slade, T Rex and Suzi Quatro (I can still picture Suzi in her leathers!) On this particular journey home from school the No.1 song in the Singles Chart was “Tie A Yellow Ribbon Round The Old Oak Tree” by Dawn featuring Tony Orlando. I couldn’t afford to purchase singles and besides I was too young to travel into Belfast city centre on my own. But I had a tape recorder and every Sunday night without fail I would lock myself away in my room to record those songs from the Top 20 which I liked. My tape recorder picked up external sounds in addition to Radio 1, so I used my pillows to place at the foot of the door in the hope that somehow I was creating my own soundproof recording studio.

And so back to my journey home from school in April 1973. I rushed into our house in Harper Street and made my way upstairs to change. As always Mum had laid out my jersey and shorts on my bed, cleaned the previous evening and freshly ironed a few hours before the school day ended, and my Dad made sure my boots were shining, the smell of dubbin polish wax filled the bedroom. But on this occasion, there was a fourth piece of kit. Yes -you guessed correctly – it was a pair of red, white and black football socks.

Mum had given up on being able to find me a pair despite her best efforts and so she went for Plan B. Mum knitted me a pair of United socks. I put them on and had to squeeze my feet into my boots by loosening the laces more than usual as Mum had used very thick double wool. Well, she did not want my feet to get cold and was blissfully unaware that footballers wore thin socks so as they could feel the ball through their boots and slip shin guards down the front of them. What did I care? My George Best Manchester United replica football kit was complete at last and I could hardly wait to put it on. Pity I couldn’t play like George! I don’t know if it was the fact that I was dressed like Bestie from head to toe, including my long black hair, or if the opposition’s goalkeeper was crap, but that evening I scored more goals than George himself scored in his comeback game against Northampton Town on 7 February 1970 (he scored six in United’s 8-2 FA Cup Round 5 victory at the County Ground).

Great memories from a wonderful childhood. Thank you, Mum and Dad, for all you did for me and my brother David, and my three sisters, Donna, Michelle and Danielle and for all of the sacrifices you both made for your children. We all miss you both so very much and although we know you are gone, we also know you are still both watching over us.

2 Replies to “Shoot! Plus A Tale Of Dedication And A United Dream Fulfilled”