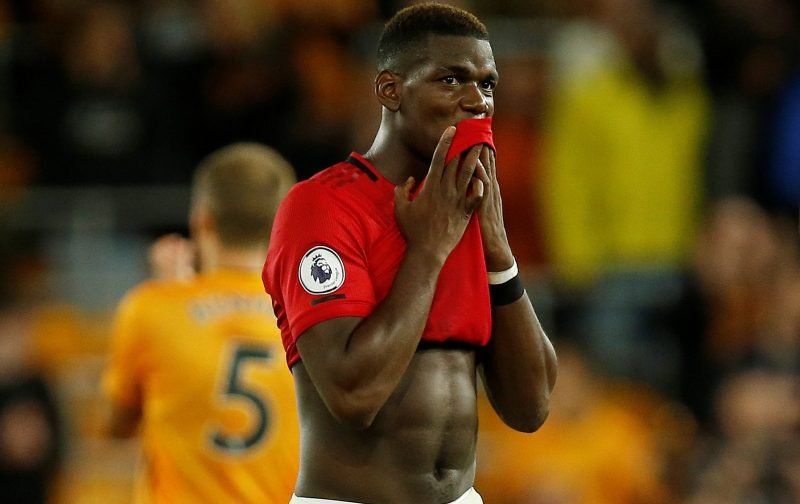 A foreign holiday where the wi-fi was non-existent has left me scrambling around playing catch up.

The excellent article below, written by John White, admirably covers the events of a fixture that appears to be a difficult one for United to win in recent times.

First of all, there is no place in football or any walk of life for racism so let’s hope the scumbag who racially abused Paul Pogba on social media is identified and brought to justice. It is disgusting.

However, in my opinion, Paul Pogba cost us two points last night. His

attitude really has no place in professional football.

He won the penalty so he decided he should take it! Really! So, if David De Gea comes up for a later corner and his header is saved on the line by an opposing defender using his hand does that automatically give him the right to take the resulting penalty? Of course, it doesn’t. And why on earth has Ole not decided who our nominated penalty taker is?

For me, Ole is as much responsible for us dropping two points as much as Pogba. Why did he not just hand the ball to Rashford who scored a penalty against Chelsea in our opening game of the season? The two of them definitely had words about it. Pogba’s penalty record for us is now 7 scored out of 11. And, speaking on manchester united.com, here is what Ole had to say about it:

“The two of them are the designated penalty shooters. It’s up to them, there and then, as to who feels ‘this is mine’. Sometimes penalty-takers feel confident enough to score. I’ve been in that situation myself and have gone up and missed a penalty for Norway. When there are two names there it’s the one who is the most confident and Paul has scored before so there’s no problem. Today Patricio made a good save. The two of them have been very confident. Last week Marcus scored a goal, I’m sure he would have loved to take another, but also Paul is confident. I like players with confidence. I’ve absolutely no problem with players walking up and saying ‘this is mine’.”

And so to last night’s game. I was delighted to see Anthony Martial score his 50th goal for us and I suppose after two losses at Molineux Stadium last season, a draw is a decent result. Well, that is one way of looking at it whereas I see it as a chance to go top of the Premier League wasted by a player’s selfishness. And 4 points from 6, 5 goals for and 1 against is a good start to our season given the opposition played. I was very impressed with our work rate as we dominated possession with 65% and the way we chased the ball when we lost it. Scott McTominay stood out for me with his industrious style of play in a heated midfield scrap.

Before the game, McTominay, in an interview with manchester united.com had remarked:

“Michael Carrick is the best example, he’s somebody who has been there and done it all and experienced everything that you can experience as a footballer. He did it as a number six and a number eight and obviously I can model my game on Michael.”

What a role model Carrick must be to our young players.

Continuing, in his post-match interview, as covered by our earlier link, Ole also added:

“We dominated possession, we got the first goal, which is a great goal and in the second half we knew Wolves were going to come out like a house on fire. They gambled a little bit, created a couple of chances and probably got the goal they deserved for the pressure they had. I thought we then took control again and could have won it. The first half was definitely a mature performance. The second half was a bit sloppier. But we are improving. We are a very young team that will learn. We learned on the pitch today as well. You have to learn on the job, you can’t just sit back and discuss it after. You have to get the mentality right after conceding a goal because that goal was coming. I thought we finished the game the strongest. Of course we got a penalty and we could have got another two points by scoring that one but sometimes the keeper makes a good save.”