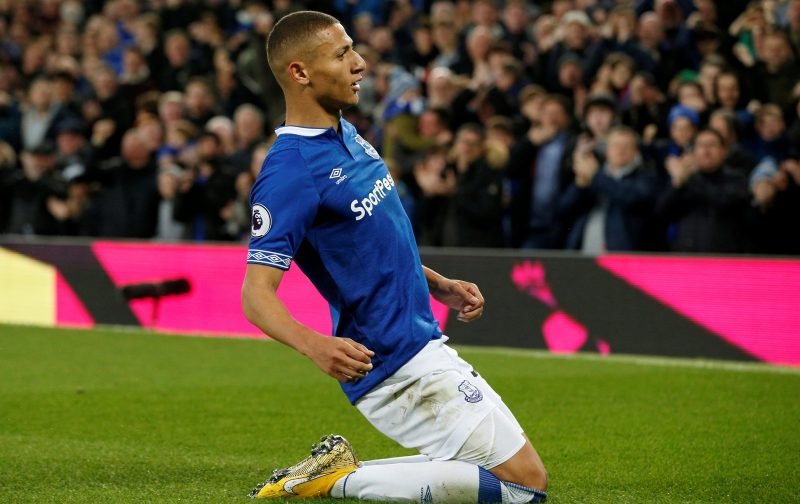 This summer it could, for Manchester United, be a case of having to speculate to accumulate.

After such a poor season last time out, we’re expecting something akin to a plethora of deals being done this summer, with as many players leaving as coming in.

Of those coming in, some will be established stars, some will have youth on their side and some may represent something of a risk.

One such speculated deal that could be placed in that latter category is a rumoured move for Richarlison.

According to the news vehicle, Teamtalk Manchester United are one of several clubs who are showing an interest in the 22-year-old who scored 14 goals in 38 appearances in all competitions last summer, with the other clubs getting a mention being Barcelona, Atletico Madrid, Paris Saint-Germain and AC Milan.

However, unless Everton decide to cash in on their asset, it appears the Brazilian is quite happy where he is and our referenced source carries the following remarks illustrating that exact point:

“It’s a nice feeling when you get praise for your good work, but I’m not thinking about a transfer at the moment. I’ve just arrived at Everton. I’m happy here.”

Richarlison is one of those players who has proven he can illuminate a game, firstly with Watford and then with Everton, for whom he joined for a fee of £40 million last summer.

I’m of the opinion that the player could become a world star once he’s given the chance to play in a higher calibre team and, naturally, I’d love to see him at Old Trafford.

However, if a deal were to be done, it won’t come cheap, Everton would be looking to recoup more than double the cash they paid Watford and the eventual fee could rise to £100 million.

Is it a deal you’d like to see Manchester United pull-off?

Personally, I feel it is a deal that won’t happen.

Cloudy Waters Begin To Clear Regarding The Future Of United Striker