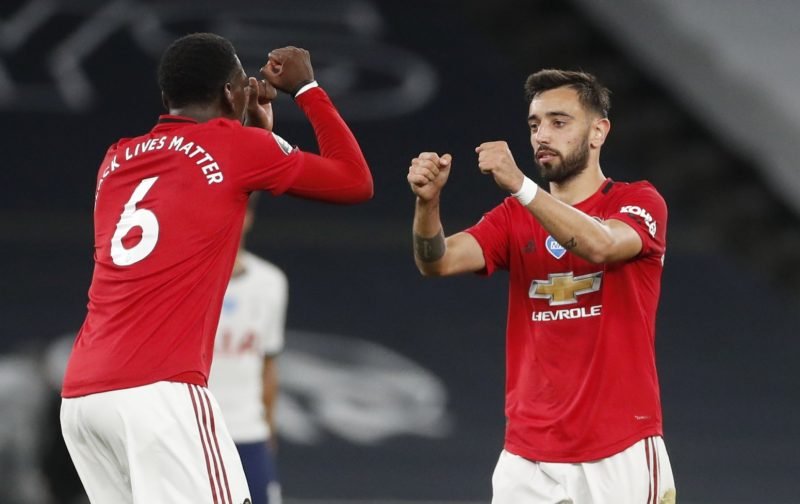 Manchester United resumed their Premier League with a trip to take on Tottenham Hotspur at White Hart Lane, on Friday evening.

With Manchester United being in such fine form before the COVID-19 pandemic brought a halt to the Premier League, the United faithful would have had hopes that their first trip to the Tottenham Hotspur Stadium would have given them the three points on offer.

Unfortunately, it wasn’t to be with the honours being shared with the game finishing 1-1.

Indeed, Manchester United had to come back from a goal down, with Steven Bergwijn’s powerful drive, in the 27th minute, evading the clutches of David de Gea.

Trailing 1-0 with an hour gone, Solksjaer made two changes that were to influence the match, bringing on Pogba and Greenwood. It was to be Pogba who was to earn the penalty that was to bring United back into the game when a powerful surge, into the box, saw him fouled by Eric Dier.

Bruno Fernandes stepped forward and despatched the spot-kick with aplomb.

As the game headed towards its dying minutes, United thought they’d earned the chance to win the game when the referee, Jon Moss, pointed to the spot again after Fernandes went down after a challenge by Dier. However, VAR, quite rightly, much to the angst of the United support, reversed the decision.

A draw was probably not the result either side wanted as they chase a place in the Champions League, next season, but at least football’s back and United have the chance to improve.