The Day I Met Eric Cantona 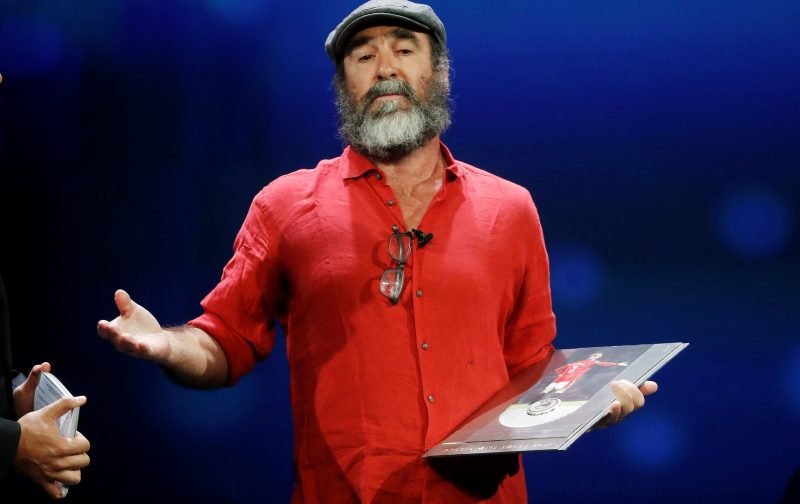 I was absolutely delighted to see one of my all-time Manchester United heroes, Eric “Le Roi” Cantona, receive the UEFA President’s Award last Thursday, to commemorate our former captain’s career and his support of charitable causes.

I will never, ever, forget Eric’s five seasons at United and how he proved to be the catalyst, the last piece of Fergie’s jigsaw, which propelled United to trophy success after trophy success. I can only imagine any United fan who first saw George Best play for us, and then watch how the Belfast Boy helped a jaded side to unprecedented glory, English First Division Championship title success in 1964-65 and again in 1966-67, and the capture of the “Holy Grail,” the European Cup in 1968, felt the same amount of excitement and level of joy as I did watching our talismanic Frenchman strut around the Old Trafford pitch. His collar stood up, his chest puffed out, Eric was a superstar. Eric was enigmatic. Eric was majestic. Eric was a genius. Eric was quite simply “Magnifique.”

Le Roi (The King) scored 82 goals in 185 appearances for us between November 1992 and May 1997, was presented with the accolade by UEFA President Aleksander Ceferin at the Champions League group-stage draw in Monte Carlo. Eric being Eric took to the sage wearing a flat cap and a red shirt and just as only Eric would do, he began his acceptance speech by quoting a line by the Duke of Gloucester from William Shakespeare’s play King Lear and left the crowd eating out of his hand by the time he exited stage left.

And there wasn’t even a single seagull in sight!

“As flies to wanton boys we are for the gods, they kill us for their sport,”

Who said football was lacking artistry and poetry? Monsieur Cantona most definitely came off with his best lines since the immortal words he uttered in the movie “Looking For Eric,” when he famously remarked: “I Am Not A Man, I Am Cantona!” Click Here.

Speaking of Eric, up until about 12 years ago when United stopped it, official Supporters’ Clubs used to be able to meet their player of the season after a game at Old Trafford. It was our way of thanking the player for his contribution to the team. The members of Carryduff MUSC voted for their player of the year in April 1994 and I then contacted Barry Moorhouse (Membership Secretary) at United to arrange to meet the chosen player. In season 1993-94, there could only be one choice and that was Eric.

Barry arranged for us to meet Eric after our last game of the season which was against Coventry City on 8 May 1994, Eric scored 18 times for us in the Premiership in his 34 league games that season and would go on to score two penalties in our 4-0 FA Cup final win over Chelsea at Wembley Stadium on 14 May 1994. So 55 (50 on the coach and 5 in JD’s car) of us set off for Manchester on the Saturday morning and the next day we saw a quite boring 0-0 draw. But the result did not matter as Steve Bruce was presented with the Premier League trophy at the end of the game and we made our way to meet Barry at a designated spot inside Old Trafford.

Barry brought us along various concourses underneath the seating area at Old Trafford until we finally arrived at a door which led down to the players’ dressing room. Everyone got their cameras ready, mobile phones with cameras were a long way off, and the item they wanted Eric to sign. Barry stood at the door and gave me the nod that our majestic No.7 was on his way. JD got everyone in line and out walked Eric. My first thought was “Flip me, he’s massive!”

Eric was dressed in a full length purple overcoat, navy blue suit, green shirt and navy blue tie. He looked exquisite, like something out of Burton’s window but bigger, much bigger. There he stood with his barrel chest stuck out and he smiled greeting us as he surveyed the room in the same manner he surveyed everyone around him out on the pitch. It was like meeting the Green Cross Code man only without his uniform. You may recall the British actor, David Prowse MBE who played the Green Cross Code man in various Public Information Films during the 1970s. Prowse was a bodybuilder and a former Mr Universe and portrayed Darth Vader in the Star Wars films.

Barry introduced Eric to me. I put out my hand to say hello and Eric smothered it in his and almost crushed it as we came together. I was lost for words, maybe it was the Darth Vader effect! Anyway, Eric sat at a table and our members filed past him one by one stopping to get their item signed and posing with Eric for a photograph.

What I remember most was that he got up from his chair for every photograph and placed his arm around anyone who stood next to him. “That’s pure class” JD said to me as he quietly purred in the background. With everyone wanting more than one item signed and their photograph with Eric taken it was taking a long time to work our way down the queue. I am convinced passers-by were jumping on to the end of our queue and so JD stood at the back of it as the last man. Barry nodded approvingly. About half an hour into our meeting with Eric I noticed a United official approaching Barry and whispering in his ear. Barry walked over to Eric and said “Eric, Isabelle would like to go now.” Eric looked up at Barry from his chair and said “I am with the fans.”

How brilliant an answer was that?

His wife was getting fed up with waiting around in the Players’ Lounge but Eric remained with us. Another 15 minutes past, there was still about 10 or so in the queue, and the same official approached Barry a second time and again said something to him. Barry rolled his eyes and approached Eric who at this point was signing a large poster for a little girl. Barry looked down at Eric and said “Eric, Isabelle says that Raphael is getting tired and they want to go home.” Eric’s daughter Josephine was not born until 1995 (remember the beach incident in the summer of 1994 when Eric got angry with some paparazzi who were taking photographs of Isabelle when she was pregnant with Josephine?).

Eric did not look up or speak a word in reply. Instead he placed his left hand in his pocket and took out a set of keys and held them up for Barry to take saying “They can go.” I was dumbstruck. Here was the most famous footballer in England, probably the world, his wife and son wanted to go home and all he was thinking about was not disappointing his fans. From that day on Eric went stratospheric in my admiration for him. When I told JD what had just happened, my mate was as quick as a flash and shouted across the room to Barry “Here Barry, if the big lad is stuck for a lift home me and Chalkie (that’s me) will take him. We’ve the car parked outside so it’s no bother to us.” Barry, who to this day is a good friend of JD and I, shuddered at the thought of letting Eric get into a car with the two of us.

I am sure Barry was thinking “Them two will take him back to the hotel and probably try and talk Eric into going back to Carryduff on the coach with them.” I must admit the thought did cross our minds, well the taking Eric back to the hotel part anyway. But Barry in his own witty style said “Does your insurance policy cover you for a £5 million loss?”

Remember at the time Roy Keane was the most expensive player to be transferred between two British clubs when United paid Nottingham Forest £3.75 million for his services in July 1993. JD turned and looked at me and said “Chalkie, does my policy cover me for £5 million?” I replied “Dunno mate you’d need to check the small print.” It was like a scene from Only Fools and Horses when Rodney said to Del Boy “Er, well. I am a good salesman.” Del Boy replied “Do me a favour Rodney! You couldn’t flog a black cat to a witch!” JD and I couldn’t flog our offer to Barry either to take Eric home.

Merci Beaucoup for the memories Eric. We still miss you.

The above is taken from my book:

“Kicking Through The Troubles: How Manchester United Helped To Heal A Divided Community.”