Lukaku – Don’t Look Back In Anger 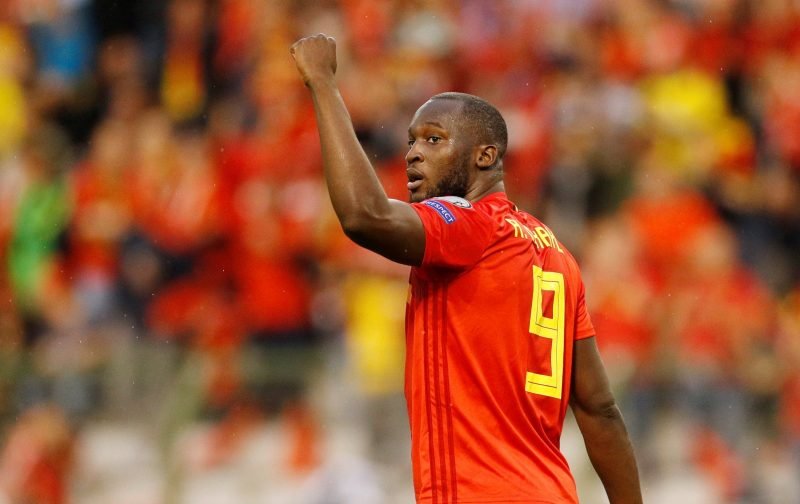 No, I am not referring to the title of a song performed by a band with the same name as a non-carbonated soft drink, Oasis.

I actually had to check if they were a band or a group so I typed “Oasis” into Google and had to scroll down to the third entry on the page to get my answer. Oasis Clothing – Womens Fashion Clothing Online was the first entry!

What I am referring to is that it is back in the news again that Romelu Lukaku claims he was “scapegoated” during his time at Manchester United.

But first of all let me say that I find it absolutely repulsive that Romelu was subjected to a racist comment by TopCalcio24’s , Luciano Passirani, on Italian TV last week, with the Independnet, reporting it as thus:

“If you go one-on-one with him he will murder you. The only way to come up against him is maybe give him 10 bananas to eat.”

Thankfully, Passirani lost his job after that disgusting tirade.

That is quite shocking to read and makes me feel sick. And Romelu was recently subjected to monkey chants by Cagliari fans, as reported by The BBC, when he scored a penalty for Inter Milan in a 2-1 victory. What a bunch of empty heads!

The Belgian striker, who left us for Inter Milan in a £73 million deal before the 2019-20 season kicked-off, also claimed that he, Paul Pogba and Alexis Sanchez were unfairly blamed for our poor campaign last season that saw us finish 6th in the Premier League and miss out on Champions League football this season. Lukaku also feels he was mistreated after falling out of favour with Ole Gunnar Solskjaer.

Last season we scored 65 Premier League goals: Lukaku scored 12, Pogba scored 13 and Sanchez scored 1 (they played in 78 games between them). So this trio, I refuse to call them a Trinity as my fellow Reds would find me guilty of blaspheming the Holy Trinity of Law, Best and Charlton, scored 40% of our mediocre goals tally. Incidentally, Lingard, Martial and Rashford netted 24 Premier League goals between them in 86 games.

I agree with our former striker, but not his comment that he was a scapegoat. I am of the opinion that he, Pogba and Sanchez were culpable for our disappointing sixth place finish.

Lukaku was far too static up front and his lack of movement simply made it easy for defenders to mark him out of a game. Ex-United player, Rio Ferdinand, said the following about Lukaku last season, as covered by Talksport

“When the ball is developing more in central areas of the pitch he just stands and really he’s got to be moving even if he’s sometimes standing offside. Make defenders think, and at the moment defenders are seeing exactly where he is, he’s not moving so you know what he’s doing and for a defender that’s a dream. You need players moving in behind, making your defender changing position and changing the eyeliner”

During his time at United, Lukaku was criticised for a perceived weight problem, an issue Gary Neville, who wears his United heart on his sleeve, described as “unforgivable” for a professional footballer.

During the 2017-18 season, Jose Mourinho bizarrely blamed Lukaku’s goal scoring drought on the Belgian international not having a multi-million pound boot deal!

“I think he needs a big contract with his boots because he doesn’t have a contract with any brand. That’s why he’s playing in black boots,”

said Mourinho and as reported by Sky Sports.

For me, I thought blaming your football boots on not scoring was only something Billy Dane from the comic “Roy of the Rovers” would come off with. Billy was a very poor footballer until one day when he found a pair of old style, ankle high football boots while cleaning his grandmother’s attic. The boots, which his grandfather had purchased as a souvenir many years earlier, had belonged to a famous footballer named Charles “Dead Shot” Keen. The boots possessed magical abilities which turned Billy into a prolific goal scorer whenever he wore them. In addition to giving Billy the ability to score regularly, the boots also granted him the intuition to be in the right place at the time on the pitch.

So. what was Lukaku’s excuse last season for his limpness in front of goal, with 15 from his 45 appearances in all competitions?

It couldn’t have been down to his boots again because he signed a lucrative contract with Puma in June 2018. Upon agreeing the contract Lukaku remarked and as reported by ESPN;

“Choosing on an exclusive sportswear brand to work with is an important decision, not just for the boots on the pitch but for my goals and desires off of it. I look forward to hustling with the big cat in the future.”

The fact is he has no excuse other than his own poor form. Puma may well be a big cat but as far as I can see, our big striker quickly turned into a kitten. When I was growing up during the 1970s, I played football every day at the top of Harper Street in the Short Strand area of East Belfast where I lived and I went through quite a few pair of football boots. Well, back then there was no grass in my area, not even the stuff you could smoke, so our concrete pitch took its’ toll on rubber studs. And, of course, they were George Best Stylo football boots but alas, unlike Billy Dane, they never helped me play like my boyhood hero, The Belfast Boy himself, Georgie Best. Lukaku’s form was that poor, I was tempted to look around my attic in the hope that I still had an old pair of my Stylo boots to post him.

One game last season summed up for me Lukaku’s form, or rather lack of it, it was versus Juventus at Old Trafford in the Champions League. Against the Italian side, nicknamed “The Old Lady,” our £90 million striker failed to have a shot on target; had no shots off target; had one shot which was blocked; made 22 passes but none of them key passes and never tackled a single opponent. It was as clear as day to everyone who saw the Juventus game, with the exception of Mourinho, that Lukaku was not only struggling, but seriously lacking confidence in front of goal. Yes, he made several runs out to the wing against Juventus but that is not a striker’s role. I want him running at defences, not away from them! He was dominated in the air and on the pitch by Giorgio Chiellini who is 34 years old, 9 years older than him. But the Italian defender was most definitely not “The Old Man” on the pitch that night.

I am old enough to remember a striker we paid £1.25 million for in October 1980. That striker was Garry Birtles who Dave Sexton purchased from Nottingham Forest. Birtles was a prolific striker under Brian Clough at Forest and his goals helped them win the League Cup (1979), 2 European Cups (1979 & 1980) and the European Super Cup (1979). He played 25 competitive games for us in season 1980-81 and never found the back of the net once. He was a striker lacking confidence just like Lukaku was last season. I was at the game when Lukaku scored on his Premier League debut for us, scoring twice in a 4-0 win over West Han United at Old Trafford on the opening day of the 2017-18 season.

And, I was actually at the game when Birtles scored his first goal for Manchester United. On 10 February 1981, United visited Belfast to play Linfield at Windsor Park in a friendly. Several of the United players were more than a little apprehensive about visiting the city because of the sectarian violence at that time. However, Dave Sexton, the United manager insisted his players “had an obligation not only to meet this fixture, but with the football lovers over there who have shown us such loyalty.”

United’s Irish Red Army turned up at Windsor Park in their hordes to watch their heroes take on the local side – 35,000 in total, which was a higher attendance than any Northern Ireland side had attracted for a World Cup qualifier over the previous decade. Indeed, the game had to be delayed by 15 minutes to allow the fans to make their way into the ground such was the pull of United. United won 1-0 in a drab game, thanks to a goal from Garry Birtles in the 22nd minute.

Former United player Trevor Anderson was probably the best player on view that night as he did his best to help Linfield attempt to cause a major upset, while our two Northern Ireland internationals, Sammy McIlroy and Jimmy Nicholl, played for United. The following season, 1981-82, Birtles scored 11 times in 36 games before packing his bags to return to Forest at the start of the 1982-83 season after not being selected for any games. His knack of scoring returned and over the next five seasons he netted 46 times in 151 games.

And as I started with the title of a song, so I will end with a song. Despite Lukaku scoring twice in his first three Serie A games, I cannot get the words of a Shania Twain song out of my head when I think of Romelu:

That Don’t Impress Me Much

So, my message to Romelu is “Don’t look back in anger at your time with United,” because this United fan has already said “Sono contento che hai lasciato,” (Italian for “I am pleased you left”).

4 Replies to “Lukaku – Don’t Look Back In Anger”