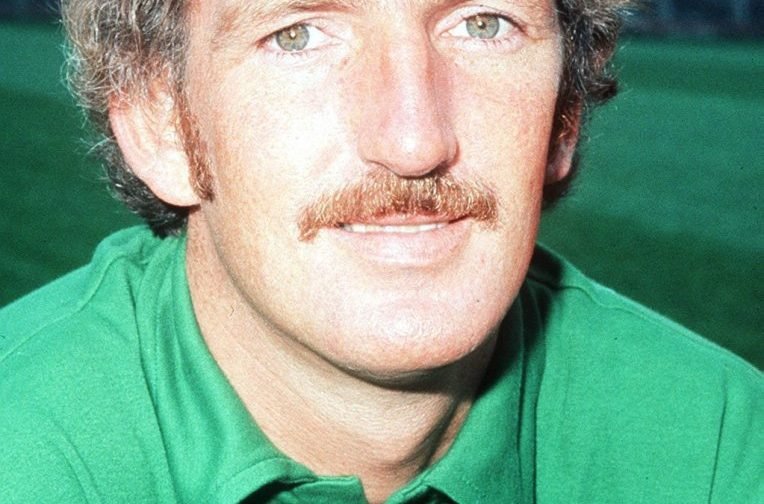 On 17 September 1966, Alex Stepney made his Manchester United debut.

Northern Ireland’s international goalkeeper, Harry Gregg, the hero of the 1958 Munich Air Disaster, wore the No.1 jersey in two of United’s opening six First Division games of the 1966–67 season (David Gaskell played in the other 4), but he made his 247th and final appearance for Manchester United on 7 September 1966, a 3-0 away defeat to Stoke City at the Victoria Ground having kept 48 clean sheets.

Busby had just signed Alex Stepney from Chelsea, who was immediately handed the No. 1 jersey upon his arrival at Old Trafford, which effectively ended Gregg’s career at United and Gaskell’s for that matter too. To be fair, Harry probably knew his number was up at Old Trafford due to injury.

Four months earlier, May 1966, the future Manchester United manager, Tommy Docherty, signed Stepney for Chelsea from Millwall for a world record fee for a goalkeeper, £50,000. Docherty had planned to play his current No.1, Peter Bonetti, and Stepney in alternative games but when Busby enquired about Stepney he was allowed to leave Stamford Bridge after making just one appearance for The Blues in a new world record transfer deal of £55,000.

Alex Stepney was born on 18 September 1942, in Mitcham Junction, Surrey and attended Hackbridge Junior School and Carshalton West Secondary School. At primary school the young Stepney played as a centre forward but when he went to secondary school he was asked to play in nets. He also played in goal for Achilles Boy Club, a Sunday League team and he represented Sutton and Carshalton District Schools and was a reserve player for the London and Surrey Boys team.

The teenage Stepney got a job as a ball boy for Chelsea and when he left school, he became an apprentice paint sprayer. Following an unsuccessful trial with Fulham he joined his local team, Tooting and Mitcham United FC, which was playing in the Isthmian League. He had to give up his apprenticeship after contracting dermatitis and got a job with Philips Electrical in Croydon, London working in their publicity department. In February 1963, he was invited to play for Millwall to help the London club catch up on its postponed matches as a result of the Big Freeze which swept the country in the winter of 1962-63 (December to February). His impressive displays in goal attracted advances for his services from Blackburn Rovers and Wolverhampton Wanderers but in the end, he signed for Millwall on 13 May 1963.

Stepney’s Manchester United debut was a 1-0 victory over derby rivals, Manchester City, at Old Trafford with Denis Law the scorer. Alex played in every league game thereafter, 35 in total, with 20 wins, 12 draws and 3 defeats to help United win the 1966-67 First Division Championship by four points over Nottingham Forest. Such was Stepney’s contribution to United’s title winning campaign, Busby described his recent acquisition as “the single most important factor behind our championship in 1967.” At the time, Forest were managed by United’s first ever Irish captain, Johnny Carey. Gentleman Jim, as he was affectionately nicknamed by the United fans, captained United to FA Cup success in 1948, the First Division Championship in 1951-52 and the 1952 FA Charity Shield, the first three trophies won by United under Busby. Stepney was in goal for United in the 1967 FA Charity Shield which was played at Old Trafford.

Up until the inaugural FA Charity Shield contested at Wembley Stadium in 1974, the fixture was always played at the home of the reigning League Champions. Tottenham Hotspur, the reigning FA Cup holders, visited Old Trafford on 12 August 1967 to contest the annual curtain raiser to a season. Although the game was notable for a high scoring draw, 3-3, it is best remembered for an incident involving the opposing goalkeepers. The Spurs’ goalkeeper, Pat Jennings, who ironically had succeeded Harry Gregg in 1964 as Northern Ireland’s No.1, punted the ball down the field and the crowd of 54,106 watched it bounce in front of Stepney and go over his head into the net. Jennings made his international debut as an 18-year-old on 15 April 1964 in a British Home International Championship game versus Wales at Vetch Field, Swansea. Northern Ireland won the game 3-2 with a certain 17-year-old also making his debut in the green of Ireland that day, George Best.

The 1967-68 season was a historic one for United and Stepney played a key part in it. On a balmy evening in London on 29 May 1968, just 18 days after United had to play second fiddle to their local rivals, Manchester City, by finishing runners-up to them in the First Division (58 points to 56), United were at Wembley Stadium to face SL Benfica in the 1968 European Cup final. Ten years on from the tragedy in Munich, Matt Busby’s third great side stood on the verge of history hoping to become the first English team to win Europe’s most coveted prize. United defeated the Portuguese Champions 4-1 after extra time with Stepney making a wonder save from the legendary striker, Eusebio, in the closing minutes of normal time. To his credit Eusebio, nicknamed The Black Panther, applauded the save. And so, the players had delivered the Holy Grail, the European Cup, for their manager, Matt Busby to help him, and the club and fans, erase the memory of the Munich Air Disaster a decade earlier.

Over the course of the following five seasons 1968-69 to 1972-73, Stepney had a stranglehold on being the United custodian. By this time Busby had gone and returned for a second spell in charge (1 October 1945–4 June 1969 & 29 December 1970-8 June 1971), Wilf McGuinness, who had succeeded Busby, had been sacked (4 June 1969-29 December 1970) and Frank O’Farrell had enjoyed a brief spell in the manager’s hot seat (8 June 1971-19 December 1972). When his former boss, Tommy Docherty (The Doc), was appointed the Manchester United manager on 29 December 1972, the manager’s door seemingly resembled a set of revolving doors such was the ins and outs taking place. But Alex was still the preferred choice in goal, playing in 38 of United’s 42 league games in season 1972-73. I was absolutely furious when the Doc allowed the original King, Denis, to leave United at the end of the 1972-73 season and worse still, he signed for our neighbours. I think the fact that he had previously played for City eased my pain a little but it was still a huge shock to see him leave.

At the start of the 1973–74 season, Docherty was on the lookout for a new goalkeeper as cover for Stepney, and in October 1973, he signed Patrick “Paddy” Roche in a £15,000 transfer deal from the Dublin-based club, Shelbourne. But Roche knew he would have to bide his time, as Stepney was one of the best and most consistent keepers in the business, who rarely missed a game. United’s poor form from the 1972-73 season continued into the following campaign and we were struggling to string some good results together. Goals were hard to come by, with United players finding the back of the net just 10 times in their first 12 games. And I deliberately said United players as opposed to forwards because defenders Steve James and Jim Holton had scored for us.

Perhaps the most alarming statistic of all is that at the end of October 1973, our leading goal-scorer was only on 2 goals and three players had managed to score twice: Brian Kidd and Sammy McIlroy. The third was actually Stepney who was our penalty taker and he netted from the spot against Leicester City and Birmingham City. And when your team can only manage 38 goals in 42 league games you don’t have to be Einstein to calculate that you are in serious trouble and so, we were relegated to the Second Division at the end of the 1973-74 campaign. I was devastated. And of course, Alex was in goal for United when Denis Law famously scored from a back-heel kick for Manchester City in the derby game played at Old Trafford on 27 April 1974 when we lost 1-0.

United returned to the top-flight of English football at the first attempt, with Alex playing in 40 of our 42 league games, Paddy played in the other two, to help United clinch the 1974-75 Second Division Championship. Docherty’s young team (Alex was 33) played an attractive, and exciting brand of football in season 1975-76 which saw us finish third in the table and runners-up in the 1976 FA Cup final to Southampton in a shock 1-0 defeat. The following season Alex made 40 league appearances and won an FA Cup winners’ medal at Wembley Stadium on 21 May 1977, when United beat Liverpool 2-1 in the Silver Jubilee FA Cup final. I can still see Alex in his blue goalkeeper’s jersey. Our FA Cup final victory prevented Liverpool rom winning the Treble, some 22 years before we made that particular piece of football history. However, just 44 days after The Doc paraded around the Wembley pitch holding the lid of the FA Cup above his head, he was sacked by the club over an affair with Mary Brown, the wife of the club’s physio, Laurie. Dave Sexton was appointed United manager on 14 July 1977, Stepney’s fifth different boss at Old Trafford. Like Docherty, Sexton was a former Chelsea manager (1971-74).

However, after 6 losses in the opening 13 league games of the 1977–78 season, new manager Sexton dropped Stepney and gave Roche the No. 1 jersey, and he had a run of 18 consecutive First Division starts. Sadly for Roche, results did not improve as United won 6, drew 5 and lost 7 during that period, so Stepney was reinstated for the rest of the campaign. In January 1978, Sexton signed 19-year-old goalkeeper Gary Bailey from Witts University, South Africa, which had veteran Stepney and Roche looking over their shoulders at the tall, blond-haired new arrival. Alex was 36-years old going into the 1978-79 season but had been replaced in the United goal by Paddy Roche early the previous season. Paddy had made some howlers in nets for United but Sexton stuck with him as his No.1 choice.

After making a total of 23 appearances the previous season, Roche started the 1978–79 campaign as United’s No.1 goalkeeper for the first 14 League games. But in the last of them he conceded five goals against Birmingham City, who would later be relegated, and it was clear that changes were needed. Sexton made a £440,000 bid for Coventry City’s Scottish international goalkeeper Jim Blyth, but he failed a medical, so on 18 November 1978, Bailey was given his United debut and played well in a 2–0 home win over Ipswich Town. That was effectively the end of Roche’s United career and over the course of the next three seasons he played only a further 5 times for United, making his 53rd and final appearance for United on 5 December 1981 at Southampton in a 3–2 defeat.

In February 1979, Stepney left Old Trafford after spending 13 years at the club and joined Dallas Tornados in the North American Soccer League (NASL) and later played for Altrincham (1979-80 on loan & 1981-82). He also had spells as a goalkeeping coach with Southampton, Exeter City and Manchester City.

Alex made 539 appearances for United, kept 175 clean sheets and scored 2 goals. He was only capped once by England, a 3-1 win over Sweden in a friendly played at Wembley Stadium on 22 May 1968, one week before he climbed Wembley’s famous 39 steps to collect his European Cup winners’ medal. The game saw Stepney’s United teammate, Bobby Charlton, score his 45th goal for his country to surpass Jimmy Greaves’ record of 44. Although he was a member of England’s squads for the 1968 European Championships and the 1970 World Cup, he faced stiff opposition for his country’s No.1 jersey from Stoke City’s Gordon Banks, manager Sir Alf Ramsey’s first choice goalkeeper, and Chelsea’s Peter Bonetti.

Alex made a club record 92 consecutive appearances for United, a record which as then surpassed by his 1977 FA Cup winning teammate, Steve Coppell. He is also United’s all-time leading goal scorer as a goalkeeper, with 2 goals.