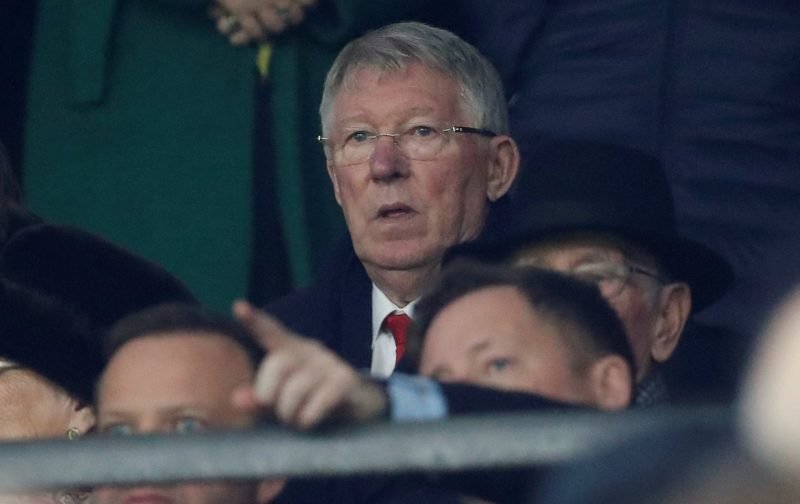 On 13 September 2006, Manchester United defeated Glasgow Celtic 3-2 at Old Trafford in a UEFA Champions League Group F match thanks to two goals from Louis Saha and one from Ole Gunnar Solskjaer.

United and Celtic have very close links with many players having played for both clubs and a number of players’ Testimonials involving the British giants. When Matt Busby took charge of Manchester United in 1945, the first player he purchased was a Celtic player, striker Jimmy Delaney. Other notable players to play for both sides include Paddy Crerand, Lou Macari, Brian McClair, Lee Martin, Dion Dublin, Liam Miller, Roy Keane and Henrik Larsson.

If I may, I would like to share a United-Celtic story with you which appears in my book.

On Tuesday 1 April 2003, Sir Alex was back over in Carryduff for his third visit and once again he was doing his part to assist cross-community work in Northern Ireland. Our Branch President, John Dempsey and I organised another fundraiser for the Boss’s Mum’s charity (JD and I were the Patrons of The Elizabeth Hardie Ferguson Charitable Trust Fund) and once again we held a Sportsmans’ Dinner in the Europa Hotel.

In his programme notes for the dinner the Boss wrote the following:

“I am delighted to be a Patron of Carryduff MUSC and I am honoured to be here with you this evening to celebrate the Branch’s 12 years of true devotion. Carryduff MUSC will always be in my thoughts and I would like to take this opportunity to thank all of the Branch Members for your loyalty and continued support of our team and your hard work and dedication in helping the Trust Fund. Have a wonderful evening.”

Just by mentioning the Boss’s name opened so many doors to us. As with the previous Trust Fund dinner, I decided to host a sports memorabilia auction at the event and so I sent out numerous “begging” letters to football clubs and sports stars requesting a signed item to use to raise funds for the charity.

There were 20 items in the sports auction, a spooky total as the Boss retired ten years later having secured Manchester United’s 20th League Championship. The Old Firm duo of Celtic and Rangers sent an autographed football as did Everton, England and United; Bernard Gallacher sent his Ryder Cup team captain’s shirt; the Belfast Giants ice hockey team donated a signed hockey stick plus there were a number of framed signed prints from Becks and Sparky. The national team managers of England and Northern Ireland sent a signed football shirt. The auction raised a considerable amount of money for the Trust Fund which JD and I knew would be able to help us bring even more children from opposite sides of the religious divide in the province together through their shared love of sport.

Local comedian, Patrick Kielty, agreed to conduct the sports auction and he was brilliant as he cracked jokes all the way through it. Those people who were sitting in the two tables directly in front of him got some sledging. Paddy, who is a big fan of United, asked one guy if the lady next to him was his wife and when he said it was Paddy then asked him if she was his first wife. When the guy said no, Paddy said: “She wouldn’t have been my first choice either mate.”

It wasn’t safe to leave your seat when Patrick had the microphone in his hand because he just singled you out for special humiliation. When it came to the auction Patrick decided to auction the Celtic and Rangers balls one after the other. He started with the Rangers ball and said that it had been donated by Alex McLeish the manager of Glasgow Rangers. Paddy invited an opening bid of £100 and like a shot a mate of mine, George Crossett (Big Geordie), from the Shankill Road stuck up his hand. Paddy asked Big Geordie where he was from and when my mate told him Paddy said: “I may have guessed you would be from there. You’ve got that look about you!” When the bids reached £200 Paddy said: “C’mon there must be a Fenian out there who will give me £210 for this thing just to get the satisfaction of burning it.” The ball raised £200 for charity.

Then Patrick turned his attention to the Celtic ball which had been sent over by Martin O’Neill the Celtic boss. “Right let’s show these Orangemen in the room how this is done and let’s make sure we get more than £200 for this beautiful ball,” said Patrick. Again Paddy started with a request for an opening bid of £100 and got it instantly. “Where are you from Big Lad?” Patrick asked the bidder. “West Belfast,” was his reply which could have been any one of several nationalist areas in the city.

Paddy looked at him and then turned to the entire audience and said: “Right when he leaves, we all leave!” The room erupted with laughter. In the end the ball raised £250. Next up was the autographed Manchester United football but Patrick caught me off guard when I picked it up to show the audience. Patrick said: “We did have one more item from Rangers to auction. Andy Goram (the Glasgow Rangers goalkeeper) donated his black balaclava and his black gloves but then withdrew them as he needs them for the weekend.” Everybody in the room was in stitches. Paddy was referring to a newspaper photograph showing Andy with a UVF banner behind him which was unfurled without Andy knowing.

More stories like this can be found in my book – “Kicking Through The Troubles: How Manchester United Helped To Heal Divided Community.”

Kicking Through the Troubles by John White